What if Custer was not placed in command of the 7th Cavalry here on Earth. What if he instead had a long career in the 5th cavalry which was transferred to Mars?

For the two months since I started sculpting the gashant I've had this image in my head of Custer at the Little Big Horn.But my mind superimposes Custer and his troopers in a desperate fight with Hill Martians. The cavalry are trapped within the banks of some dried canal behind a makeshift barricade of dead gashants while the martians stream and swirl around them on their own mounts.

With this image in mind, I did the first simple conversions of the gashant model. 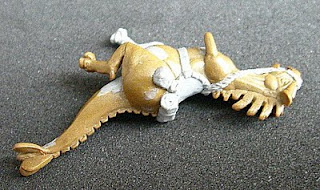 This one is converted from the original green which came back with the base broken off. The second is from one of the casts. I hacked a bit here, re-positioned a leg or tail there and added some tack. 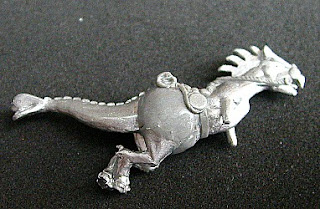 I don't see the sense in making multiple styles for what will in effect only be a scenic piece or marker. So the plan is to make one mold only and sell them in sets of 4 or 6. I'm not sure what multiples I can get in the mold yet.

Posted by Rodrick Campbell at 2:44 PM

The thought occurs this mount could do double duty with just the addition of a little more SF-ish instead of Victorian-ish rider as a option....

Yes, I've tested this out with the post-apoc rider I did. Looks pretty cool.

I'd have to make separate molds of gashants if they're to be used for sci-fi, though. That way folks don't have to buy the VSF riders as well.