This is an adjunct post to the previous one about my experiences with roll20 for running RPGs. While I was getting my Forbidden Lands game up and running I was working on two parallel projects for more traditional table top wargames with miniatures. One friend was just starting to get into Burrows and Badgers before the isolation order came down. And I had been painting a Napoleonic Penninsular army for Black Powder. When I'm learning a new skill I become somewhat obsessed. I like to push limits and try things that stretch or break the systems involved. Naturally I decided to try adapting roll20 to both the aforementioned games. It's a virtual table top, right? 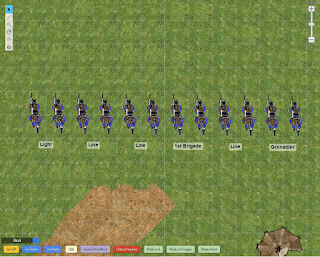 I'll focus this post on the Black Powder Battles development since it's the one that, while still rough, is fully functional as a wargame with live opponents. My first step was to start counter design. I didn't even create a new came at this point. I simply started grabbing some blank top downs from Junior General and colorized them. 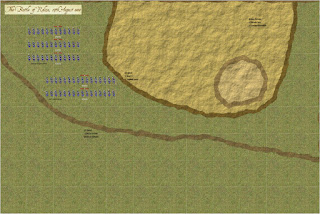 To give some direction to the project, I chose a specific battle to build. Working with some judicious cut and paste and Inkscape, I developed the textures and terrain layout for a 4' x 6' board. I like that I can keep notes about terrain effects and any other information directly on or near the map area where it is available at a glance. At this point I was also starting to develop the look and feel of the units and the flexibility I wanted to build in. 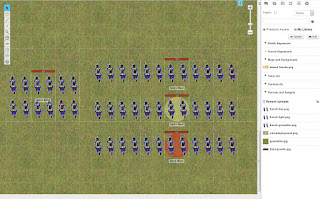 I styled them after the bases I use in the physical game. They are discrete stands of 4 figures that can be moved as a group or individually selected to affect formation changes. The tokens in roll20 have Aura settings that I'm using for different conditions; red for disordered and yellow for shaken. These can be turned on at the same time to represent both conditions at once with a resulting orange color. I have since set the shape of the disordered to square so it is easier still to see when both are present. 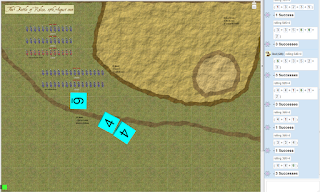 I wrote a simple dice roller macro and added it to the macro bar and also the token action bar. This one will ask for the number of dice with a preset value of 3 and then ask for the number to get a hit. Again, I used a preset, 4, for the number needed. This will troll dice and report the number of successes. I still need to write one for command rolls and a few other things. But right now the roller can be set to 2 dice and the results added manually to see if your orders are received. 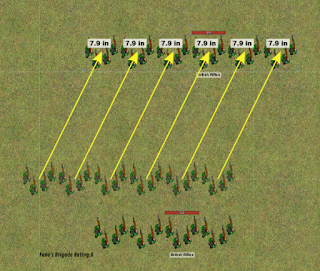 There is a built in measurement function for checking distances with a slightly different function to measure moves as you are manipulation units. 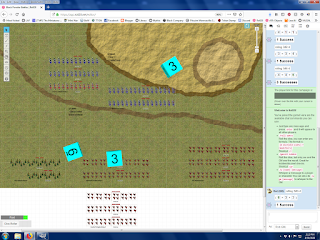 Here is the Rolica set up with all of the infantry added. I still have to design the cavalry, artillery and leader tokens. 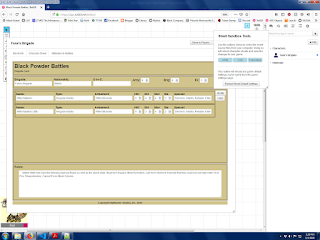 I wanted to get a trial game in with a friend this weekend so I took some time to develop a character sheet that would show relevant information for each brigade. It's been about 20 years since I've done any work with HTML and CSS code. Man, have things changed, but I must say for the better. Using a couple example sheets and watching an hour or two of training videos, I was able to pur this together. It lacks polish but it does the job. It has an expandable section where battalions can be added or removed as needed. That was a pretty clever bit of code that I blatantly ripped from another sheet. 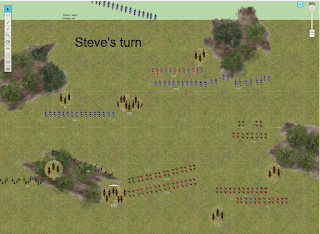 Rolica is not ready to roll yet so I made a simple map with some brigades and stunt double leaders for the game tonight. It took about 45 minutes to teach the interface to my buddy, but things wen't fairly smoothly once a unit or two was moved. In typical fashion my troops (British) don't seem to be interested in joining the fray. All in all, this has been time well spent and I plan to use this with distant friends even when the lock down is over. I can see being able to use it for multiple players since that's pretty much what the platform was designed to do.

If you have any questions about specifics or thughts about VTT in general, I'd love to hear from you.

Posted by Rodrick Campbell at 12:51 AM

Very clever and perfect for the moment.

Wonderful work! This is the kind of information that are meant to be shared around the internet. Shame on the search engines for not positioning this publish upper! Come on over and discuss with my web site . Thank you =)

I have been exploring for a bit for any high-quality articles or weblog posts in this kind of area . Exploring in Yahoo I ultimately stumbled upon this website. Studying this info So i am happy to convey that I have an incredibly just right uncanny feeling I came upon just what I needed. I most no doubt will make sure to don?t fail to remember this site and provides it a look on a relentless basis.

This is a really well written article. I’ll be sure to bookmark it and come back to read extra of your helpful info. Thank you for the post. I will certainly comeback.
ហ្វានតាន Online​​