Some things I've learned from a heart attack

Some of you are aware that one year ago today I survived what my health coach calls a major heath event. The physical recovery has been fairly straightforward. The mental and emotional part has been a little more tricky. I'd like to share the following thoughts as a reminder to myself and anyone else dealing with similar issues.

Some things I've learned from a heart attack...

1) Even in the midst of a life altering event, remaining positive, pleasant, and polite can greatly reduce or eliminate misery.


2) Beating yourself up over past mistakes will not heal you. Learn from them, make changes, and move forward.

3) Never underestimate the healing power and comfort of a few kind words, a call, or a visit to someone dealing with a crisis.

4) Listen to your body. It's smarter than your brain.

5) I've known this all my life but it's worth mentioning again. Gratitude is key.

I wish you all health, wealth and joy in this new year. 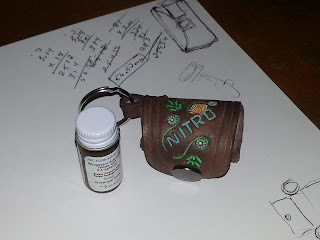 Man, it's been a long time.

Recovery from a life changing health event has been interesting to say the least. The physical stuff was easy. Wrapping my head around things... well... not so much at times. It has made me question what it is I want to do and what direction I want my business to take.

The short version is that I've decided to close the online website. There were just too many issues with security that Bluehost no longer wishes to help their customers with without a large outlay of money. So I'm shifting my business to a mail order model. During the rest of January I'll be posting photo catalogs as an album here at FB and as a page at the Highlander Studios blog. I'll also be putting it in PDF form to send to those interested in my products. I'll get a line item list together today to send to those interested in ordering products in the interim.


I'm also thinking about selling some of the product lines and limiting the development of future lines so that I can focus more of sculpting and painting commissions. My true passion lies in the creation aspect of things rather than the business end.

Thank you all for your support and interest in my work. May you have a prosperous, healthy and joyous new year! 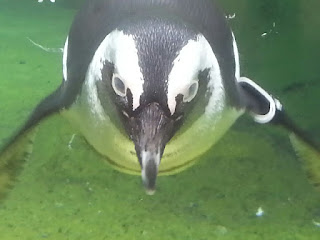 Some Sculpting for Myself

Winter and it's enforced time indoors has definitely helped get me back in the sculpting groove. I still need to wrap up two long overdue commissions. It is a great source of embarrassment when things get swept aside; not forgotten but lost in the daily grind due to one excuse or another. I blame rectal-cranial inversion.

Since the beginning of February I've been averaging almost one figure a day, about forty in seven weeks. There is space on the table that I haven't seen in ages and the pile of completed figures ready to be molded has grown. Today I was able to deliver five personal projects to the mold maker for production in April. Here are a three of my favorites. 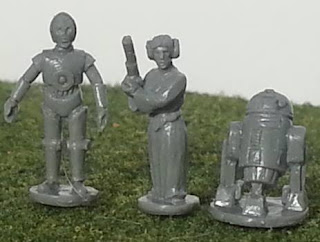 I'm stoked and sculpting has become fun again. Now to finish those projects and the two new commissions.

Lo There Do I See My Father

One of my guilty pleasures when it comes to movies is the 113th Warrior. Every time I see it when channel surfing, I stop whatever else I'm doing and watch it. It doesn't matter at what point I came in,I like to sit and finish the movie. Yes, I know it's crap from a historical perspective, but the imagery and the story have me in it's grip from the moment Hrothgar's son arrives at the Viking burial.

When I started sculpting figures a whole new world was opened to me and my gaming table, but with it came a whole new set of problems. You see, I want to sculpt everything. Sometimes it is just an artistic interest to see if I can recreate some of my favorite characters in miniature. Other times, I want to put them on the table and have a game around them. There are stories to tell that aren't in the books and movies I'm reading. Also, I doubt very much if I'm the only person who feels this way.

Now those first two paragraphs may seem to belong to two different posts, but when both concepts are experienced at the same time, there is an even more driving urge to create the subject matter in miniature. I don't have the time to go haring off after every sculpting whim. But every now and then the stars align and I get a commission to do those projects close to my heart. One such was Splintered Light Miniatures' Romano-British line of figures and the accompanying Dark Age armies. The most recent has been a set based loosely on the 13th Warrior also for Splintered Lght.

Here are some pics of this 20 piece, 15mm set. They are in the order of completion. Some of the warriors' have very little screen time and costumes change throughout so I've done the best I could to find image sources and made other details up.

To be honest, this project took a lot longer than it should have. Many life challenges, a project that was given priority, the search for imagery, and a garden that consumed nine months of my time last year got in the way. I was able to get back to sculpting regularly in January and get these wrapped up this month. I can't say when they will be made available as that isn't up to me.

David, thank-you for your patience and the really cool commission.

You Can Ride Herd if You're a Zulu

Yesterday I received the stock for two new 15mm products.

First up is a herd of cape buffalo. There are 3 adult male, 2 adult female and 2 young sculpts. I also couldn't resist adding a Zulu rider to the set. 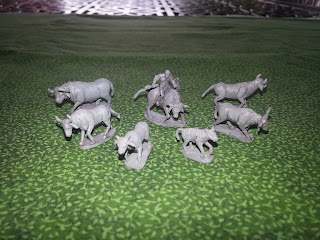 
The second is the infamous Ned Kelly gang in armor. I've been fascinated with Ned Kelly since I saw an article about a 1/35 scale diorama in a modeling magazine as a kid. I have mounted police and constables on the workbench now and plan to make a Glenrowan Inn model. 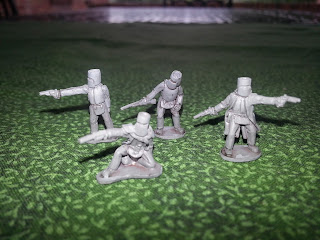 
There have been a couple of other items to come off the workbench recently. This wizard's tower in 15mm has been a piece 6 years in the making. As the putty would get too firm to place on a figure I was sculpting I added more stones to the tower. I'll post again when I have decided how I will be putting it into production. 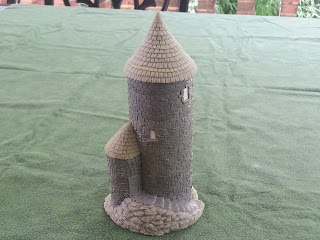 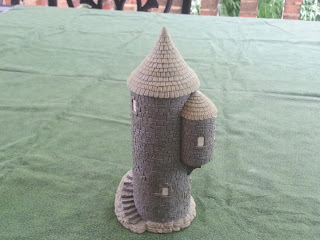 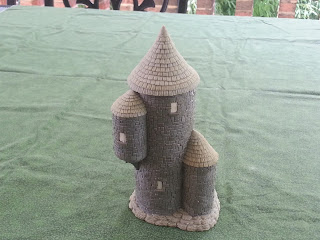 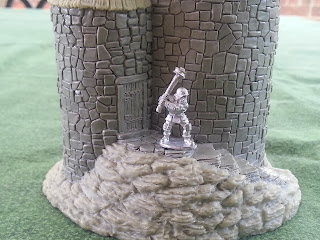 I'd like to also remind folks that there are random items for sale at the Ag Division page. My wife and I are considering buying the property across the street to expand our gardening and orchard area. The house will need to come down, but hopefully we'll be able to keep the garage and turn the house foundation into a year round greenhouse.